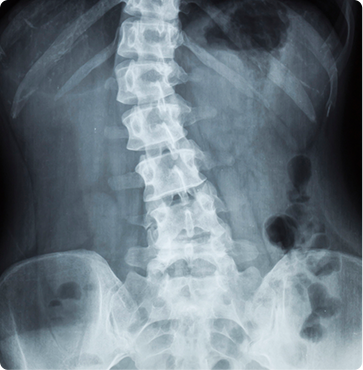 It is normal for the human spine to curve slightly from front to back. When the spine curves sideways in an “S” or “C” shape, it’s called scoliosis. Scoliosis is also characterized by a twisting rotation, so as the spine twists it pulls the ribs along with it, making one side of the chest higher than the other and one shoulder higher than the other.

Scoliosis takes different shapes for different people. Some with the deformity have no pain or loss of function, while others may have intractable pain and a variety of dysfunctions as their scoliosis takes many different forms. Another form of spinal deformity is called kyphosis. This is where the spine curves severely at the top, giving a hunch-backed appearance.

There are many different causes of abnormal spinal curves. In some babies, the spine grows unevenly. This is called congenital scoliosis or congenital kyphosis. Some children have nerve or muscle diseases, injuries, or other illnesses that cause spinal deformities. Cerebral palsy is just one example.

Though children with scoliosis rarely have problems, we like to see them and treat their condition before they reach adulthood. Scoliosis in adults often causes back pain, lost function, breathing problems, and cosmetic disfigurement. Often, scoliosis worsens with age.

Spinal deformities such as scoliosis and kyphosis in young patients can be treated with special braces, provided the curvature or deformity is mild. In severe cases, surgery becomes the only sensible option for the patient and their quality of life.

Surgery to correct more severe cases of scoliosis may involve a posterior (operating from the rear) fusion technique, an anterior (operating from the front) fusion technique, or a combination of both approaches. At Spine Specialists of Boston, we use the best approach for each individual patient and their specific condition. We also use a minimally invasive anterior approach.

For more information about spinal deformities and your treatment options, call Spine Specialists of Boston at (617) 860-6388.